Speak to a Sleep Expert: 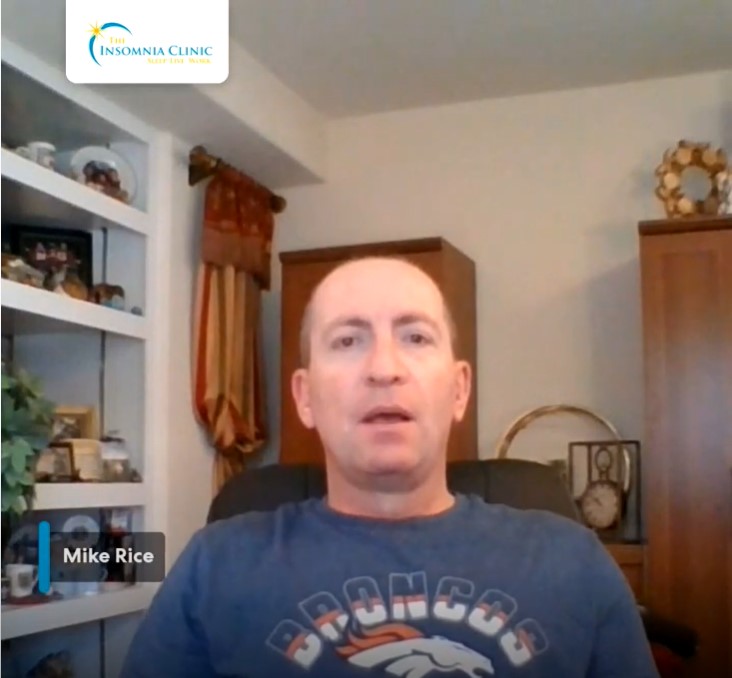 Describe your sleep problem before coming to The Insomnia Clinic.

Mike R.: My sleep problem was that I was waking up in the middle night around two or three in the morning. And when I woke up my brain would take off spinning and I would not be able to get back to sleep. I have a lot going on my life right now. I’m an executive with an aerospace company. Having a number of challenges with our teenage young-adult children going through some mental health issues. And the overwhelming amount of, I’ll say stress, that was on me all the time would just kick in at two or three o’clock. Didn’t matter whether I went to bed at nine or midnight. As soon as I woke up that first time my brain would just spin. I would not be able to get back to sleep and it effectively started to really impact my life in a negative way.

Describe your experience trying to fix your sleep problem before coming to the clinic.

Mike R.: So I tried a number of things to deal with my sleep and make it better. The main one was going to doctors and at the doctor they prescribed medication. The first one was a pretty strong antipsychotic that helped initially, but that made me feel very weird. And when I actually got off of it I went through some really strong withdrawal, which scared me. After that they prescribed trazodone and I used the trazodone for a good amount of time. It worked initially and then it slowly stopped being helpful as well. Yet it also made me feel a little strange. Also tried over the counter sleep aids. They also helped in a very short term but over the long term did not. So mainly medications. And I just didn’t get the effect that I needed over the long term. And I also just knew that medications weren’t the right way to deal with the issue.

What was different about The Insomnia Clinic?

Mike R.: There are a couple of things that were different about the insomnia clinic. The first one was, this is what they do. They are experts in this. When you go see your family doc. This is one of 100 things they’re dealing with. Insomnia Clinic absolutely knows what they’re talking about. It’s all they do and they have seen positive results. There is confidence, not arrogance, but confidence that they know that the way they address this will work over the long term. The other big one was they don’t deal with this with medication, which was a big deal for me.

Take us to the moment you realized our program was working for you.

Mike R.:  I realized the program was working for me when I’d say after maybe a couple of months, maybe a month or so, of going through the training and following the process. I started waking up as I usually did around two or three in the morning. And the stress that I tended to feel that would generally get my brain spinning, would kind of come in a bit and then it would leave and I would actually go roll back over and go back to sleep. And that had not happened to me for years. That’s absolutely what I knew that we were making progress and heading in the right direction.

Tell us what life looks like now that you’re sleeping and feeling better.

Mike R.: So what does my life look now after going through the program successfully completing it? It’s hard to describe how much better it is. It’s also hard to describe how impactful insomnia can be. I’m a pretty upbeat, positive person, but it just wears you down over time, you just get kind of foggy and it starts to mess with your personality and some of your relationships. Now I have confidence when I go to sleep. I am not frustrated if I do get a poor night’s sleep now and again, because that happens. I feel fine about it. I’m actually not spending a lot of time rolling around in bed every evening thrashing around, which gets very frustrating and so I actually wake up a little earlier than I used to. But I get a lot of things done that I didn’t before and I’m getting more efficient sleep in a smaller time frame. So, it’s absolutely had a huge, positive, impact in my life. 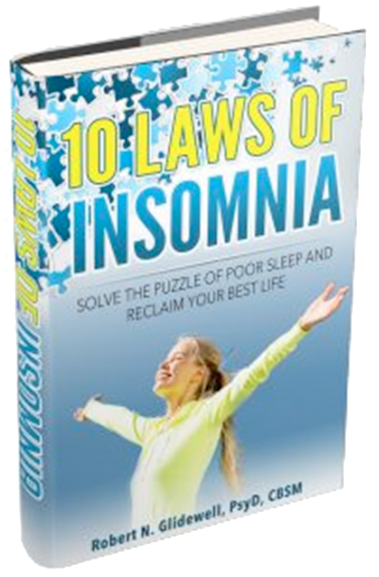 Get 8 chapters of the "10 Laws of Insomnia" FREE

Get 8 Chapters of the "10 Laws of Insomnia" FREE

During this appointment, you will get a sleep expert’s opinion on the nature of your sleep problem and gain clarity about whether we can help.

You will be asked to confirm these details in a moment.

Take the first step toward healthy natural sleep with a private Guided Sleep Discovery interview. During this appointment, you will gain a deeper understanding of your sleep problems and receive a personalized sleep recovery plan.

To help you begin your sleep transformation, we’re giving away 8 key chapters of Dr. Glidewell’s book. With this free resource, you will…

Register for a Workshop